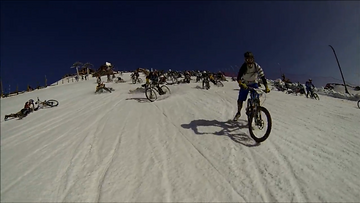 Russell Turner
Are you ok dude!? Wasn't my intention to hit you at the end there... Can't believe you have it on video and it got round to me! Some guy flew across from the right & I didn't have time avoid both of you, I was doing about 60mph! Dislocated my shoulder, cracked a rib and the impact cut through my rear brake line!! Hope you had a good one despite that, all the best man, 1011.

Alpine Gravity
Gday Russell Turner. Yeah im ok mate, all good. I realise you didnt hit me on purpose and on the video you can see the guy you were trying to avoid who crashed into the back of me aswell. No ones fault. Unfortunately when your bike hit mine it broke my rear derailer and my shifter at the same time, leaving me in the hardest gear for the rest of the race as it was knackered after the impact and so I couldnt change gears and had to walk or run up the climbs. I wasnt injured but yeah that was the end of my race (even though I finished-there was no "racing" after that). All good though and ill be back next year and setting up the bike differently from qualifying to the final race. Hope your injuries are mending and all is good with you mate. Seeya next year hey