Denis Cindro:we were on La Palma from 11th of February, part of company for one week, part for two. For me it was the 5th visit and we were shocked because of these new bike prohibitions. We met rangers twice - the first time on Roque de los Muchachos, he put down the plate numbers of our cars, he told us that it is prohibited to bike on GR 131 to Puerto de Tazacorte and if there will be any complaints from hikers they will punish us. Because of that we decided to ride on the other trail that starts at heliport and goes toward Tijarafe. The next time there was a ranger in a car and he followed us in a car while we were biking on paved road toward El Pilar! When we stopped, he stopped too, in between he "took care" about another company of bikers. After that he drove after us, he "found" us carrying bikes on a trail, he stopped us, turned to road and told that we can bake only on roads where cars can drive (in the region of Cumbre Vieja)
Zum Vergrößern anklicken.... 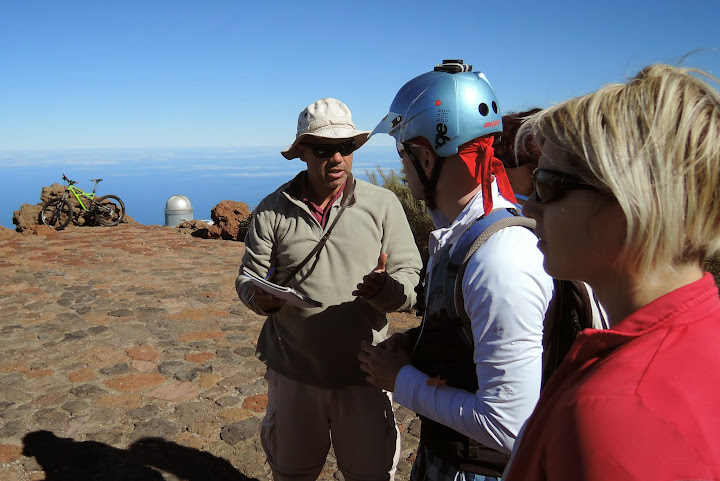 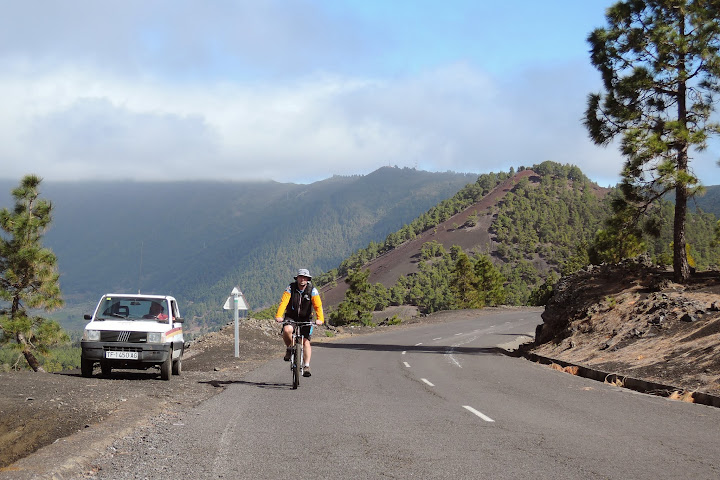 Ort
on sunny side of Alps

here I continue our story - after the communication with that ranger (he was polite), we continued on unpaved road (he was happy and turned) until Hoyo de la Sima and there we took SR LP 107 (in fact that was our plan), the trail was signed with sticker and on the most technical part of trail we met German couple. We waited them to pass, but she could not be silent and fist she said that it is extremely difficult. As we didn't complain, she complained further and she told us that it is absolutely forbidden to ride bikes on that trail. We told her we know it, waited them to pass by and then we continued our ride to Puerto Naos. Here is a photo how they signed Bikeverbot (it is after the difficult part of that trail, the one that the German couple saw): 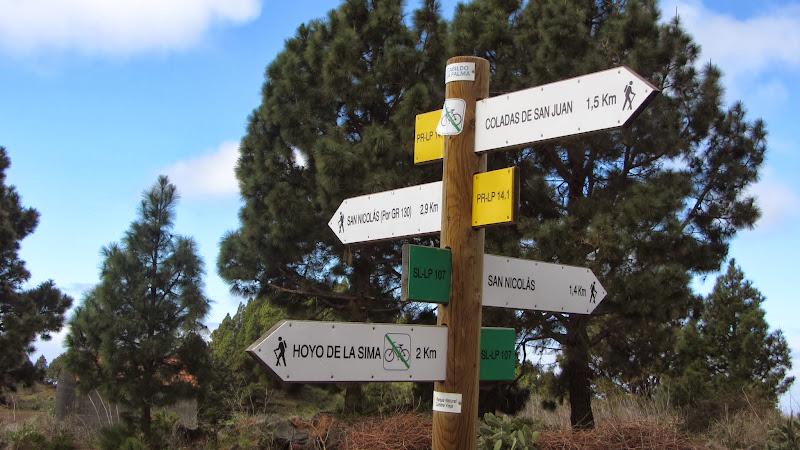 What can we learn from this story - if there are such stickers and "Bikeverbots" some people reacts and they start to think about MTB bikers as mobs. Usually people who are in general intolerant and unhappy in their lives complain in such cases, maybe teh reason is also to show their power. We have similar problems also in our country (where by law or regulation it is forbidden to ride bikes everywhere - we are hardly engaged in the process for changing it). But I must say, in La Palma, as in Slovenia, most of the hikers show enthusiasm when they meet us, just from time to time we meet unpleasant people. On La Palma we biked as much as we planned and mostly where we planned, only we had bad feeling that we could meet ranger somewhere

the cabildo delete the sticker NO BIKE comming soon

Thanks for your story, Denis!
We were on La Palma beginning of January this year. At this time, we didn't see any "biking forbidden" signs (or maybe we didn't watch out for them?) and didn't have any encounter with a park ranger. The ranger sitting in the hut at the parking place at Roque Muchachos saw us with our bikes (we were sitting there a rather long time, eating sandwiches for lunch), but didn't bother about us. This seems to be some really abrupt change in policy!
On the trails there were scarcely people, and the few hikers (most of them German) we did encounter, were all really friendly and interested, at the most they were a bit astonished, that one could ride a bike on this terrain. No negative vibrations there.
What a pity, what some supid signs can do to people

On Tenerife it is already the same situation since a few years, as it seems on La Palma now. In 2011 we saw lots of "biking forbidden" signs all over the island of Tenerife, and it was not really fun to bike there, because you always had a bad feeling on the trails. Only the Anaga mountains are still for the most part "free" of those signs. Therefore, in 2013 we only did some Anaga trails on Tenerife, and did not go anywhere else on the island.
As the situation seems now, we will not spend another holiday on La Palma, until they stop this idiocy. I think, bikers are already a quite big economic factor for the tourism industry on La Palma... maybe already bigger than hiking tourism. It will hurt them for sure, if many bikers now turn to other destinations, where they are more welcome. Let's see what happens

Ort
on sunny side of Alps

It seems to be real big and recent change in the "biking policy" on La Palma - in former visits we didn't have any problem with neither rangers neither hikers. At every visit we did the GR 131 from Roque and the ranger was usually just sitting in the hut. This time he came out, was very kind to us, he just put plate numbers on the paper, told us that it is not allowed to ride GR 131 and he told us that he will react only in the case if somebody complain. In fact he didn't forbit us to ride. But we had bad feeling and we decided to ride PR LP 11 then 10 and GR 131 in the end

. He told us it is not forbidden to ride the PR LP 11 trail.

I think (hope) it will be like on Lake Garda - many years ago they closed all trails for biking but in short time hotel managers complained and they open them again. We will see

Pokora schrieb:
I think (hope) it will be like on Lake Garda - many years ago they closed all trails for biking but in short time hotel managers complained and they open them again. We will see


Sorry but the trails on Lake Garda are officially still closed except some few exceptional cases. 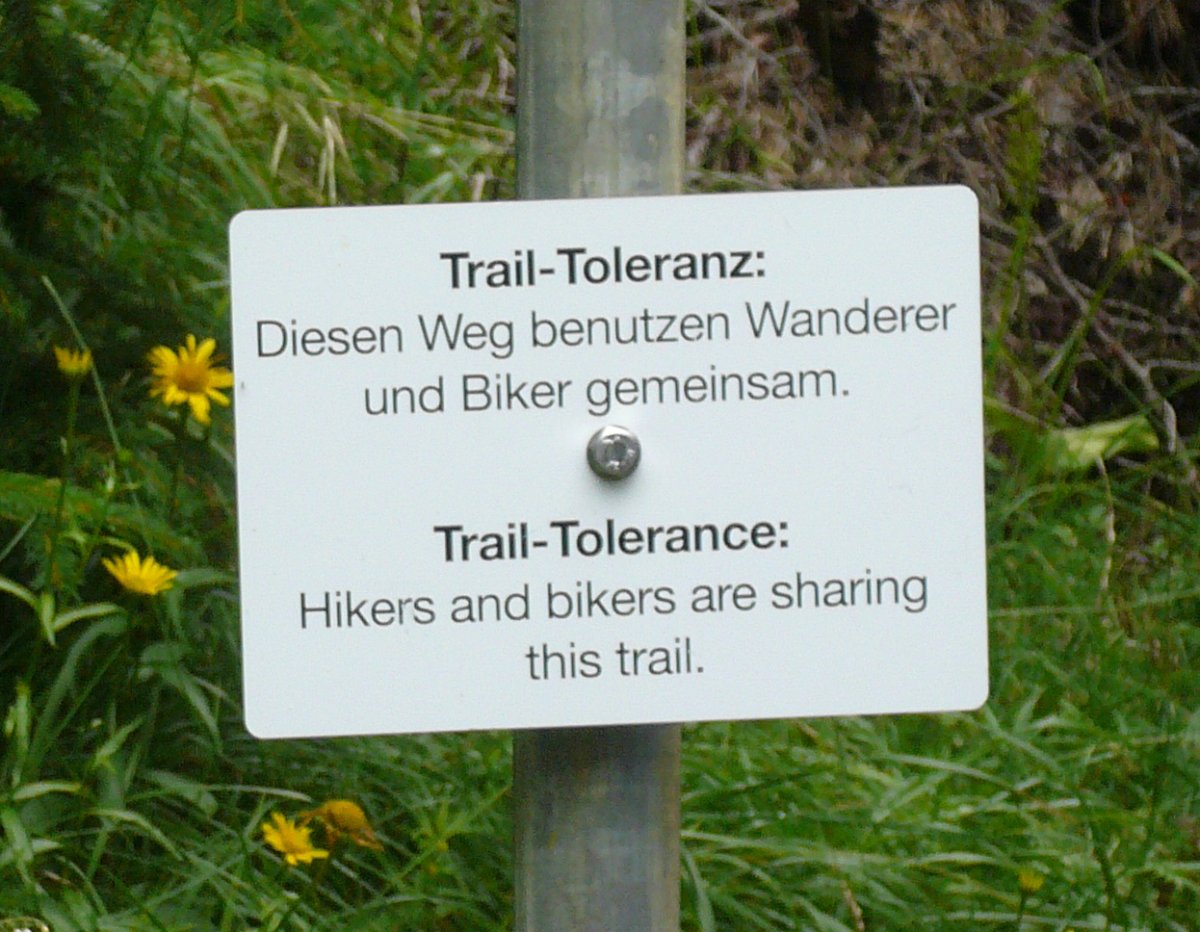 Become a millionaire - be a Sportfunktionär