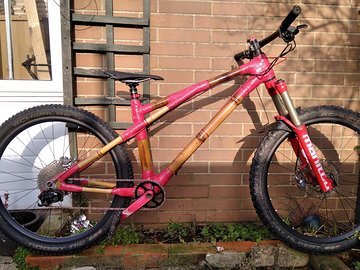 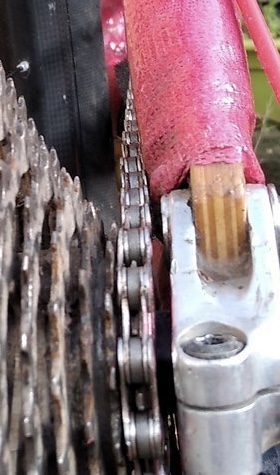 Cheers for all the comments !! : D.
Did not even know my bike had been featured !!
Only just found out by chance

I never built it to be a show piece, and tbh I built it to try and prove I "could".
I didn't expect it to turn out so well, and actually be able to use it propperly.
I've completely got used to the BB lateral flex now, and don't even think twice about taking it off drops\jumps or giving it as much as I can in the corners.

Yes, I completely agree with all of you on the doubting of Aliexpress cabon bars.
I have had a fair few (and had some fail on me during a crash in the past), and these ones have passed all of my extreme static and dynamic load tests so I'm more than happy to ride them without a second thought.

FastFabi93 schrieb:
The weight of the frame would be interesting to know.
Zum Vergrößern anklicken....

Frame weight is ~ 3kg including the BB, headset and seat clamp. (not much more than the Octane One Prone it replaced)

Choosing "red" tape is deffinitely questionable. BUT I will admit it DID make it much easier to re-assure the wife did I had managed to remove all of the fiberglass shards from our carpets and rug after it managed to get everywhere in the house after doing sanding outside!
I do not want to paint the joints, as I feel I want to be proud and show it what homemade so I chose to live with the color and clear coat only.
I'm really really happy with it, and you don't care what color it is when its plastered in mud, and your grinning from ear to ear chasing your mates down the trails!

Advice for everyone ....
Give something crazy a go ... it might just work out.

Now get away from your keyboards and go enjoy riding your bikes: D
(which i will also be doing after this poxy lockdown eazes it's been 3mths since I've been offroad now!)

Maybe I would try it again.
I think the chain on the smallest sprocket rasps away the connection from the seat to the chain stay. A bit unfavorable, I would think ...

Yeah, this is one of my choices.
I preferred to leave as much material on the seat stay dropout joint as possible, and let the chain take the edge out of what is left if it needs to.
Otherwise I'm sure I would've taken off too much and weakened it.
I push a 38t front ring, so getting into the 11t cog isn't all that common, hence why it's still bowing out a little.

I am 90kg and definitely don't ride lightly or slowly, and I've over wrapped every joint on the frame by about double what it should probably need.

@Trail Surfer I scar (e) myself on a daily basis: thumb: